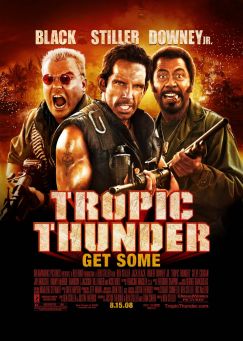 Tropic Thunder feels like it wouldn’t have mattered if nobody had seen it. I watched it thinking that this film was made more for every actor involved to have fun and mess around than it was to actually make any money. It’s because of this that I loved it! From the ingenious fake trailers used to introduce each character at the beginning to the countless, ridiculous cameo’s, this film was brilliant. It felt like each actor was trying to outdo the others and be as outrageous as they could be. When those actors include Ben Stiller, Jack Black, Robert Downey Jr and Tom Cruise, the result will only ever be amazing.

The film itself is made up of ridiculous ideas. I could imagine three men sat around trying to come up with the most ridiculous scenarios for a film and its characters. “Let’s have Ben Stiller play an action hero.” “No, let’s have Jack Black play a heroin addict going cold turkey in the jungle.” “No, let’s have Robert Downey Jr play a black guy.” “Okay, Steve, you win!”

Each actor must have realised that this film would only work if they gave 110% and were willing to go to places and do things they would never have done before. Ben Stiller pretending to be a retarded, horse whisperer. Jack Black just playing Jack Black but on hard drugs and Robert Downey Jr playing an Australian method actor who has permanently blacked himself up!

That is without even mentioning how brilliant Tom Cruise is as an obnoxious, money hungry head of a production company and Matthew Mcconaughey as a slimy, overly dedicated agent. I haven’t even scratched the surface of the cameo’s in this either. There are scenes that would warrant a second viewing alone for the chance to spot people I would have definitely missed first time around.

While I’m talking about actors, I can’t help but mention Jay Baruchel. I can’t think of a film where he hasn’t been brilliant. He has a set character to portray and has made that his own. Everytime I see him in a film, I know that he will probably steal the scene or in the case of The Sorcerer’s Apprentice or She’s Out of my League, be the best thing in the film by a far way. He is up against some stiff competition in the acting stakes as every single person is brilliant in this film but Jay still holds his own. Especially as he is actually the only “normal” person in the whole film!

It’s also to its credit that the film feels improvised or unscripted. If it is unscripted then every actor does a great job because they manage to come up with some great lines and play off each other fantastically. If it was scripted then it is even more impressive because the whole film felt natural and very improvised.

The film did highlight some other things though. Robert Downey Jr is one of the most underrated and best actors out there at the moment. You can’t imagine the guy playing the Australian, playing a black man, is the same guy who is in the Soloist or Iron Man. I know it’s a stupid comedy but it really shows off his acting talents. It also highlighted how wasted Jack Black is at the moment. The last really good film I saw him in was School of Rock or at a push, Be Kind Rewind. Though he can hold his own and do a good job in more serious roles like in King Kong, he is at his best when he is allowed to be “crazy Jack Black.” He should definitely be staying away from films like Gulliver’s Travels which I haven’t seen but looks awful.

Putting the comedy to one side though, Tropic Thunder also does the action sequences at the beginning and the end brilliantly too. The fake, over the top and spot on parody of action films at the beginning was made even better by the much more serious and perfectly done “proper” action scene at the end. For a film that seemed like a bunch of mates messing around, a lot of effort went in where it mattered, making the film even better!

Overall, not since Anchorman have I seen a film that looked like it was this much fun to make. The fact that the actors look like they are really enjoying themselves and getting a chance to do and say things they wouldn’t usually get away with made it a hilarious and really fun to film to watch. Plus, I will never get over Robert Downey Jr pretending to be a black man!