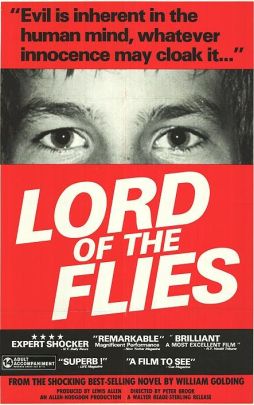 The problem some films are going to have is that they are a victim of the time they were made. Some films are classed as timeless because they tell a story that means you can overlook a film’s shortcomings or the film is made in such a way that it still holds up as watchable today. Most films will be a victim of the limitations of the time. The production will be full of dodgy cuts, shocking effects or terrible acting but will be let through because at the time, it was seen as a suitable or acceptable way to make movies.

Lord of the Flies falls into that category. Made in 1963, the film is full of “flaws” or shortcomings that I just couldn’t quite get past. It’s positive aspect being the fact that it has William Golding’s great source material to work from. In fact that was the only reason I’d watch a film like this. I’ve never read Lord of the Flies but know of the general story. I wanted to find out more and saw that this film was on late at night and me and my girlfriend gave it a watch. Unfortunately, we were both a bit underwhelmed. My girlfriend even said “if you weren’t here, I’d have turned it off half way through.”

The problem is, the film seems a bit disjointed and chaotically made. It feels as if the director told the kids what the general gist of the scene would be and let them improvise their way through it. This leads to huge pauses, weird cuts and stunted dialogue. Scenes go by where nobody really seems to say anything. There seems to be a lot of kids chanting or shouting at each other with no real purpose. It’s very strange to watch.

There are strange choices with the scenes themselves. One scene is just a long line of boys, each telling you their names. The fact that a couple of these boys break the fourth wall and look directly at the camera as it passes gives a small indication of the sloppy way the film feels like its made. Each of these boys saying their names has a huge gap in between as they wait for the camera to be pointing at them. This last for about two or three minutes but feels like it takes an age and just seems pointless and strange.

The basic story is there as I feel like I know what happens in Lord of the Flies from watching the film but I can also understand why my girlfriend wanted to switch it off. There are moments when nothing really happens. We watch the kids march for five minutes or have one boy tell a story about his home-life to another group of younger children for a whole scene. They feel like weird inclusions to pad out the time.

It seems like it could have been half an hour shorter. Missing out some of the longer scenes that take ages to get anywhere or actually working on the editing of the film that is either too slow or too quick. It’s too slow in places where the boys are either improvising their lines or waiting for a delayed que to say their line. The edits are too quick when trying to portray a conversation between two boys, clearly showing that these are two separate takes and probably demonstrating the technology of the time.

It’s not all negative though. The actual key scenes of the story are done really well. The first time the boys kill what they believe is a “monster” was difficult to watch, even if the film was made in the sixties, it had me wondering on the impact this would have had on the audience at the time. The kids do throw themselves into the roles and the three main characters, Ralph, Jack and Piggy, are played really well by their child actors. It doesn’t quite overshadow the moments when me and my girlfriend were just looking at each in confusion and bewilderment at some of the more random choices of scenes and strange dialogue.

Overall, a great story told badly. There are key moments that still have an impact, regardless of when this film was made, but this isn’t a timeless movie. In fact, it seems to suffer from when it was made, the technology, acting and dialogue being distracting and poor in places.