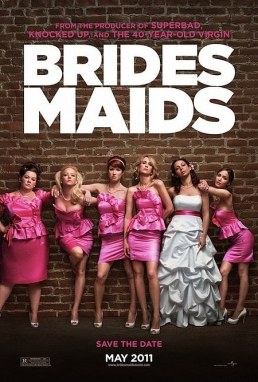 Any film should be very careful about associating itself with a successful film from the past. You always see on posters things like “from the makers of” or “from the producers of” or in the case of Bridesmaids “Better than…” The last one is usually from a critic, a small soundbite from someone who liked the film. That isn’t something the filmmakers can control but then again, they don’t have to put it on the cover of the DVD box.

It’s the biggest part of the Bridesmaids DVD box. Right at the top, “Better than the Hangover.” This was actually from Cosmopolitan magazine so it isn’t necessarily an opinion I would pay much attention too, but the idea is in my head now. The DVD box has now forced me to make an association between the Hangover, a film I thought was really funny, with this, a film that was actually advertised as a “female Hangover.” In my mind, I was expecting brilliant!

It wasn’t brilliant. It wasn’t bad, there were moments that had me laughing and characters I thought were great but I couldn’t help but think “Hangover is much better than this.” My expectation for Bridesmaids, because of both the silly comment on the front as well as all the hype that surrounded the film, meant I was probably always going to be disappointed.

It’s a good film though. There are great characters. Kristen Wiig is great as Annie Walker, the woman who has to try to perform the maid of honour duties for a host of varied and crazy bridesmaids. The best of these random ensemble is Melissa Macarthy’s Megan. She is the female version of Alan in Hangover but seems to be more obnoxious and funny because she’s female. The things she says and does are the best moments in the film and they way she reacts to the now infamous “wedding dress shop” scene is one of the funniest parts of the film.

It’s also great to see Chris O’Dowd flying the British flag in the film and coming across as the nice guy police officer. His chemistry with Kristen Wiig is one of the better parts of the film and the scene where she is trying to get his attention is made even funnier by the way he plays it. He’s a great opposite to the best casting of the film, which is Jon Hamm as Annie’s obnoxious “boyfriend.” Knowing the character he plays in Mad Men, seeing him having so much fun with this part makes it so much more appealing to watch.

In fact, it’s the chemistry between the characters and how they play off each other that makes this film so watchable. The bridesmaids themselves all bring something unique and funny to the gang and when they play off each other, like in the wedding dress shop or on the airplane, the film is at its best. The main problem is, there aren’t enough scenes demonstrating this chemistry. The actual scenes where all the bridesmaids are together and are struggling through an awkward situation are not as many as when Kristen Wiig is feeling sorry for herself or meeting up with Chris O’Dowd. That is the key issue, because all the bridesmaids together are the best parts of the film and they waste these key opportunities.

It was the combination of both the chemistry and the outrageous situations that made The Hangover such a great film. Bridesmaids imitates this in key scenes and these are the ones that are the most memorable but then the rest is very forgettable and not very funny either. The characters are great to watch and all played very well but they aren’t actually being used to the maximum effect.

Overall, the potential was here for a great film. Bridesmaids has great actresses, particularly within the bridesmaids themselves, but it focuses too much on Kristen Wiig’s character and not enough on the very funny ensemble. A few key scenes aside, this film will never really go beyond average for me and is definitely not “better than the Hangover.”