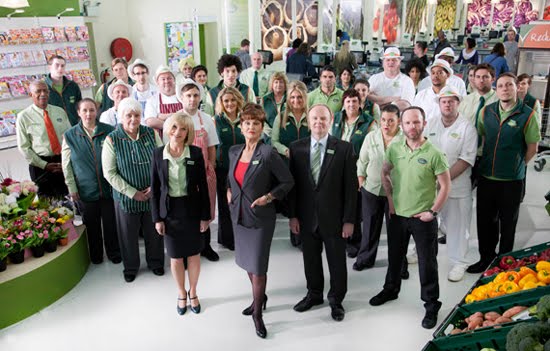 Because I review a whole tv series rather than individual episodes, there is a chance of spoilers, so if you haven’t watched the whole series yet, stop reading now!

A second season will often make or break a television show. It’s not got the “new shine” anymore. It’s not got the pressure of introducing new characters or the safety net of no-expectations. Instead, the series has to develop the characters and try to move the series forward slightly. This is harder with sitcoms because the status-quo can’t change too much. The situation and characters can’t develop too far or you lose the essence of the show. It’s a balancing act between changing things subtly enough to make the show feel fresh without changing what made the first season so good.

The situation that puts the “sit” in sitcom actually helps Trollied make this transition. A supermarket can have some substantial changes without actually changing the dynamic of the show at all. Introducing a new, rubbish food range or a couple of new characters can change the show enough that it adds something fresh to the series.

The new character introduced is Lorraine, the new store manager, replacing the more laid-back and sympathetic Gavin from the last season, who is now area manager. It means we have a new dynamic, with Lorraine, played by Stephanie Beacham, taking a tough, bulldog-like stance on the store and its employees. These aren’t subtle changes, the biggest being the firing of Leighton. It’s also worth noting that whether she intended to or not, Stephanie Beacham turns Lorraine into a carbon copy of Dragon’s Den’s Hilary Duvet. Its a mimicry that does wonders for the character.

The new character also gives the show some new stories. Now we have the issue of Julie, still annoying and still played by Jane Horricks, having to juggle her devotion between Lorraine and Gavin. Its a good addition to the show overall, even though it’s not the funniest of story strands.

The comedy still comes from the places it did in the first season. The butchers are still brilliant, with Mark Addy getting a lot more to do this season, even gaining a story-arc that last for more than a single episode. Leighton is also just as hilarious, a mix-up with the rota resulting in him working for three days straight, being a particular highlight. The only downside is that Rita May’s Margaret isn’t used as well or as much as she was in the first season. Being far and beyond the best character in the show, she instead seems to pop up with a funny line or a have a silly misunderstanding each episode, rather than any real part to play.

Stories from last season are developed too, showing that the season is slowly growing and developing. The “will-they/won’t-they” between Kieron and Katie gets a huge boost and is another interesting aspect to this season. The best love story development is actually the surprising one between Colin and Lisa. These two characters had very little development in the first season beyond being good for a funny scene, or usually a disgusting, cringe-inducing moment. Pairing the two in an unusual love-story actually makes them better characters and adds another avenue for some, still disgusting, humour.

These new developments or continuations of some of the better parts of season 1 doesn’t mean that Trollied season 2 is an overall success. Although there are some great moments, it never really equals how good the first season was. Still a great show but never as “laugh-ou-loud” funny as the first season.

Overall, Trollied survives the second season curse. It takes the great decision to add characters, develop decent stories from the first season and even make subtle but good changes to characters that felt more second-tier. Although it’s not quite as funny as it used to be, it’s still a great example of a British sitcom.

Best Episode – Episode 13; Difficult to pick a specific episode that was brilliant but the series finale had enough going on to make it just about stand-out.

Should there be another season? – Yes, Trollied still has life in it and there are some new stories that I want to see the resolution of.