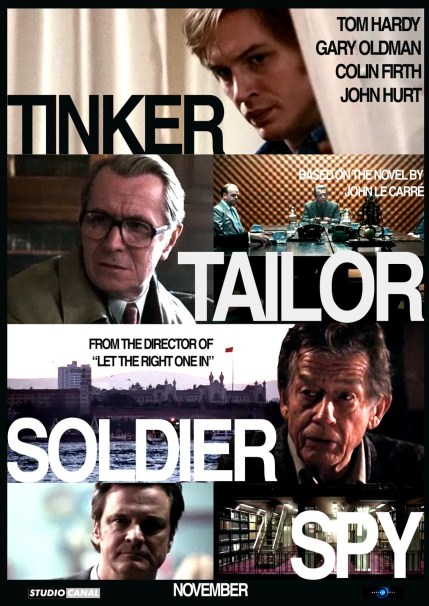 Forget Bond, Bourne and Hunt – the only true spy on film is Smiley, George Smiley. I don’t know the last time I watched a spy film that had very little action, no explosions, hardly any gunfire and a distinct lack of attractive woman but felt like a true, realistic spy thriller.

The truth is, the more you analyse him, the less Bond is anything like an effective spy. Everyone knows who he is, who he works for and what his intentions are. He announces himself with intent the minute he meets the villain and does so with an explosions bedding the bad guy’s girl or just killing most of his henchmen. It was quite refreshing to watch what felt like a true to life spy thriller. No gunplay, no explosions, no monologues or masterplans but instead deception, double-speak, mistrust and confusion.

The film is a true piece of spy drama and Gary Oldman is fantastic at orchestrating the proceedings. Smiley isn’t a formidable action hero. He is quiet, unassuming and calculating. He is two-steps ahead, says just enough to get his meaning across, trades in secrets and lies and then goes home to his broken marriage and a cup of tea. Oldman was the perfect choice and feels like a proper spy, a true gentleman who could very easily snap a neck as a steal a file.

Except he doesn’t have to do this here because he has able support to do that for him. Although there is very little kneck snapping to be done. There are moments of action, a bit of gunfighting and few scuffles but the tension is found elsewhere. I don’t know how you can manage to create suspense and tension with a simple file stealing scene in a Government archive but Tinker, Tailor manages it brilliantly.

It’s actually quite easy to see where this skill comes from. The writing is brilliant. The characters are all distinctive but puzzling. You don’t know who to trust, except Smiley and his henchman Peter, played well by Benedict Cumberbatch. In fact, the film is a who’s who of British, heavyweight acting, from the relatively new talent like Tom Hardy, to the veterans like Oldman, Colin Firth and John Hurt. They make the characters watchable and the scenes intense, even if you aren’t always sure what is going on.

The story feels straight-forward, there is a Russian spy at the top of MI5 and it could be one of four people. Smiley must discover who. This is an old-fashioned, slow-burning spy mystery though so there is misdirection, layered stories and very slow-revealing scenes. Sometimes the film does border on too slow, with parts of the film going by that have no relevance or speed. These are soon swept over though and another part of the intricate mystery is revealed.

Even if you do get lost, which I don’t think I did but could never be sure, the film does wrap itself up quite nicely and you are left feeling like you’ve seen an acting masterclass. Nobody is less than fantastic and that’s the real entertainment here. The story is great, if I understood it like I think I did, but it was seeing Oldman’s Smiley doing some old-fashioned spy work, without the martinis, Aston Martin or tuxedo, that was the most interesting part of the whole film.

Overall, Tinker, Tailor, Soldier, Spy is a great example of a true, slow-burning spy drama. It lacks any real action, explosions or anything else you’d associate with a spy film but makes up for it in tension and intelligent storytelling. The performances are a cut above anything else and makes the film worth watching, even if the story may be slow going for some and slightly too confusing for others.