3 of the Best vs 3 of the Worst is exactly what it sounds like – 3 of the best examples of either an actor, film series, genre, etc. versus 3 of the worst. It’s also an opportunity for you to have your say on my choices and whether you would have placed something ahead of my best or my worst. This week…. Actors who have played The Doctor.

While the casting of The Doctor is still fresh in everyone’s mind, I wanted to take a look back at the previous actors. I don’t think there are any truly awful actors or versions of The Doctor and I love the way in which each incarnation brings something fresh, new but ultimately familiar. There are versions of The Doctor I don’t like though, ways he is played that don’t fit with what I believe The Doctor should be. So to explain further…

I feel like I’m cheating choosing one of the “new Doctors” as the best and it feels even worst because of who has taken the number one spot but I don’t think many have done a better job of playing the Doctor than Christopher Eccleston. For me, The Doctor has to be superior, alien (pardon the pun) to those around him and not very… cuddly. Eccleston had the charm, the amazement, wonder and glee that The Doctor should have but could also turn on the anger, desperation and fury when it called for it. This is what I want from the Doctor, not someone messing around all the time but someone who knows how much better he is and uses that to save countless worlds.

My most controversial choice but for a long time my favourite Doctor. Again, he isn’t a cuddly, silly Doctor but one who is much more stern, unforgiving but with a wicked, delightful side too. You can’t imagine him getting too close and friendly with any of his companions but he did care for those he travelled with. Many people thought he was too stern and dark to be The Doctor but there is much more of Colin Baker in Eccleston and Tennant than Tom Baker.

Feels like cheating choosing Tennant as number one but he made that role his own. A role that was once synonymous with Tom Baker is now more recognisable as Tennant. It’s not a coincidence or by chance of availability that the Tenth Doctor is the incarnation announced to appear alongside Matt Smith in the fiftieth. He had the passion, charm, humour but also that darker side that I enjoy from The Doctor. He got too close to Billie Piper’s Rose for my liking but it seemed much more acceptable with her than any other Doctor/companion relationships would. I’m genuinely excited to see Tennant’s return. 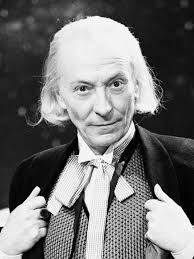 I enjoy episodes and adventures from every Doctor. I think all actors brought their own unique talents to the role and have great attributes that have stuck with the character. Hartnell will always be the First Doctor and the one that began the adventure but he isn’t actually THE Doctor. The character was too new, too serious and unknown. He is strikingly different from not just the more recent Doctors but the versions as early as Tom Baker. Maybe that was more Baker’s fault that Hartnell’s but I always get the feeling that this Doctor doesn’t fit with the others.

It’s not that the Fifth Doctor’s adventures were bad or that I don’t enjoy those episodes, in fact there is a lot of the Davison’s era I do enjoy, like the Mara tale and obviously the Death of Adric. I just don’t like Davison as the Doctor. He is too clean and proper. He feels too serious and slightly dull. There isn’t enough silly and crazy from the character itself, even though with a broccoli on his cricket uniform, there was enough crazy happening around him.

I don’t get it. I don’t understand why this is people’s number 1 choice as The Doctor. Before Tennant, if you wanted to represent The Doctor, you chose Baker. A big part of it is the length of time he played the role but that was never enough to convince me. He is too silly! He plays around too much and doesn’t really take things seriously. He is the beginning of the “cuddly” Doctor, the bigger, friendlier character and that’s the side of the Time Lord I hate. Its controversial but Baker’s stories and adventures are often the ones I enjoy the least.

Overall, very difficult list. I don’t necessarily like siding with just the “recent” Doctors but they have re-defined and re-created the show brilliantly. My choices have always been controversial, I do love Sylvester McCoy as the Doctor and would also love to see more Paul Mcgann too (fingers crossed for the Fiftieth). Let me know if you agree (or more likely) disagree completely.