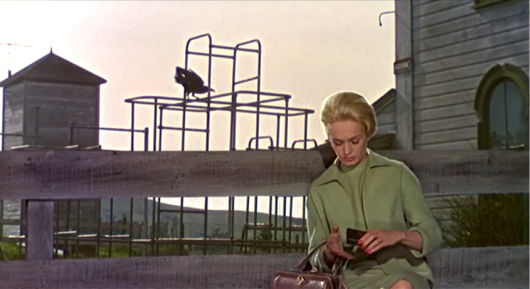 There is a simplicity in the horror of Alfred Hitchcock’s The Birds which makes it so scary. Modern horror films rely on huge, high concept story-lines, forced situations and “cattle-prod” scares in attempt to shock and amaze audiences. Hitchcock’s The Birds is a movie where the concept is killer birds and there are little to no “cattle-prod” scares at all. This doesn’t stop it being terrifying though and the scene in the playground, as crows begin to increase in number behind an unsuspecting Tippi Hedren is a perfect example of how simply terrifying the film can be.

Greatest Scene Number 16: The Birds – Crows in the Playground

This scene is simple. It doesn’t have a huge set-up. It hasn’t been ominously foreshadowed, encouraging the audience to be shouting at the screen in desperation or hidden behind their popcorn in the cinema. It does have a creepy feel to it from the beginning though, especially because of the school choir scoring the scene.

The Birds doesn’t have a traditional movie soundtrack. The only music used in the film is supplied purely by the cast and characters themselves, from a piano interlude to the children singing in the school. Children singing is creepy at the best of times but here it feels much worse, with the repetitive, almost chant like nature of the song.

Tippi Hedren’s Melanie waits patiently for them to finish and as with any great horror, the audience knows much more than the character on-screen. Unlike most horror movies, we only know a little bit more and the impact of the scene’s revelation is so much more because the building blocks are placed so calmly, innocently and inconsequentially.

We know the birds are evil and attacking, even killing, people. So we are suspicious when the first crow lands on the playground climbing-frame. What Hitchcock does, with his mastery, is doesn’t show us what is happening next. In modern horror you’d expect to see the climbing-frame slowly fill with birds while the unsuspecting character silently smokes her cigarette.

Instead, we see the first few birds land but are left watching Melanie smoking her cigarette. The audience knows something is not right but Hitchcock doesn’t take the focus from the lead character, sat unaware, smoking and waiting for the almost endless children’s singing to finish.

This is where Hitchcock demonstrates his talent for direction. The audience and Hedren’s Melanie follow a crow as it begins to fly towards the playground. It is at the exact moment that Melanie realises how many crows have amassed that the audience discovers too. It is a shocking sight. The camera is only off the climbing-frame for a minute but the sheer amount of crows is startling, not just to a terrified Melanie but to a shocked audience too.

Against horror conventions, the revelation of the crows isn’t met with a crescendo in the soundtrack and a sudden startled violin pull or crash of drums, signifying the moment of unease and terror but instead with the silence of the children. Their singing amplifies the terror even further with Melanie standing in silence, realising that she must get into the school as quickly but quietly as possible.

It is as tense a scene as you’ll see in any horror movie and what adds to the skill of the iconic director is that this is done with no music, in broad daylight. To almost add insult to injury, the children prepare to leave their classroom to go and play outside, prompting a terrified Melanie to finally enter the “safety” of the school.

Everything about the scene is perfectly scary. The music and then lack thereof. The tease and then sudden reveal of the crows. The slow, silent move of Melanie towards the door of the school. Add to this the fact that Hitchcock has used one of the more legendary ominous birds in the crow and you start to understand why he is so heralded as a master of horror.

Overall, Alfred Hitchcock schools modern horror directors with The Birds and this scene exemplifies why. It is scary, suspenseful and thrilling with no music, action or deaths. The threat is absolutely implied and when the big reveal of the scene actually comes, nobody can be expecting that many crows!

2 thoughts on “100 Greatest Scenes Number 16: Crows in the Playground”