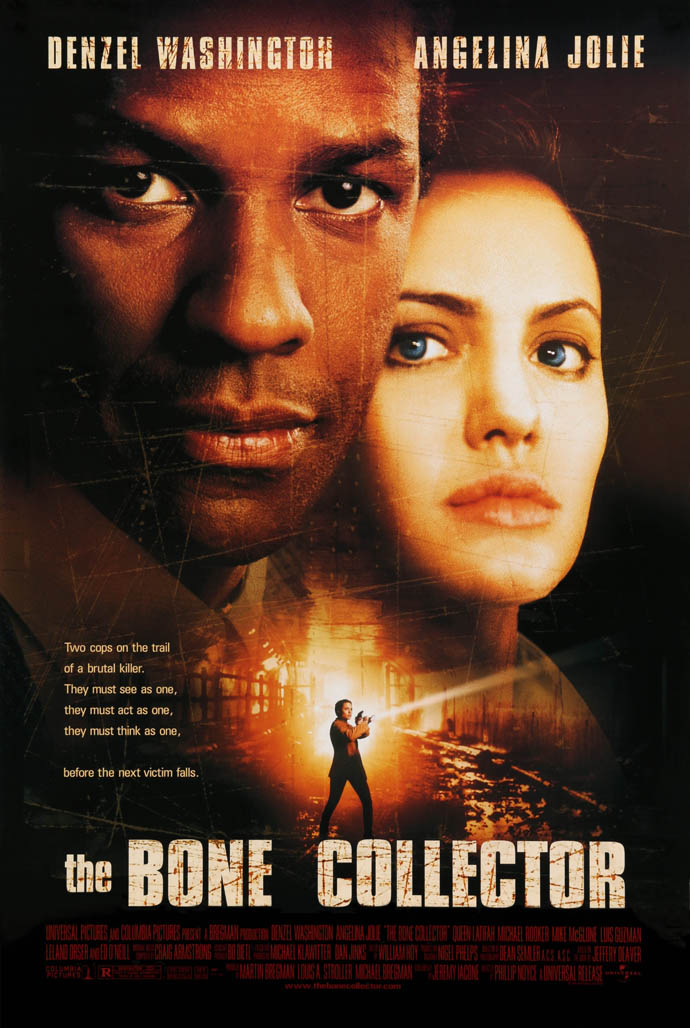 If Denzel Washington and Angelina Jolie made a film together today it would be a blockbuster. Not necessarily a big budget spectacle but certainly a movie that a studio would pin their big money hopes upon, looking at the two to draw significant audiences. This isn’t taking away from The Bone Collector but this is clearly two actors before their mega-star prime. Washington is clearly on the upper-echelon of his stardom but this is early, unsure and almost raw Jolie. She isn’t the mega-star actress she would become but we see a very assured performance and the clear indications of the actress she is today

This is one of the film’s biggest strengths. Jolie and Washington spark on-screen. They have great chemistry and deliver a very fiery “mentor and mentee” relationship, especially as Jolie’s rookie cop is clearly reluctant to be the protege of the “brilliant” paraplegic Washington.

This dynamic manages to elevate what could have been a very run-of-the-mill thriller. The Bone Collector is another one of the deluge of 90s thrillers which takes the bizarre serial killer and the troubled cop(s) and pits them off against each other. Having Washington (and by extension Jolie) be the cop in this dynamic is what makes the film work so much better and it stands above others of the same genre released at the time.

This isn’t to downplay the great story at the core of the movie. The serial killer aspect is a fantastically creepy one, with the abductions and kills unnerving to say the least. They are elaborate without being too silly and make for some scary moments, from both the victim’s point of view but also Jolie’s as the forensic investigator forced to examine the grisly scenes after the fact.

There is even a half-decent mystery to solve as well. It begins well and the bread-crumb clues offer enough that you keep ahead of the mystery without it feeling to contrived or far to simplistic. It does suffer from having a slightly random killer after all of the mystery-solving and you can’t help but feel a little short-changed when it becomes apparent that the mystery itself didn’t necessarily need solving. The finale opens up some huge plot-holes which are fairly easy to over-look but do undermine the very good work which went before.

The story also tries to shoe-horn in a bizarre romantic element to Washington and Jolie which feels completely unnecessary. The developing of mutual respect, which hits natural bumps along the way, works excellently but the writers add this extra layer which doesn’t ring true, regardless of how convincing the chemistry between the two actors is.

Overall, The Bone Collector manages to elevate itself above the random, generic thrillers of the 90s by utilising the fairly early talents of both Washington and Jolie. They bring great chemistry to a decent mystery which will hook you with it’s well-crafted clues and grisly aspects. It is a shame it can’t sustain the great work into the finale which feels forced and slightly contrived.